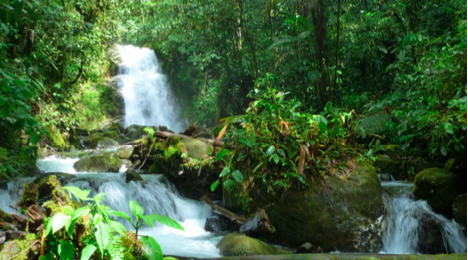 QUITO, ECUADOR—Today, a coalition of environmental organizations appeared as amicus curiae before Ecuador’s Constitutional Court to seek a robust application of the “Rights of Nature” in order to save the Los Cedros protected forest. Los Cedros is an immensely biodiverse Andean cloud forest that is under threat from recent mining concessions to state mining company ENAMI and its Canadian partners, Cornerstone Capital Group and BHP. These mining concessions now cover two-thirds of the reserve, threatening several imperiled species with extinction.

“Ecuador has inspired a global movement to recognize Nature’s rights, but now it must become effective in practice to protect and restore ecosystems,” said Carla Cardenas, an Ecuadorian lawyer and Law and Policy Associate at Earth Law Center. “Today, our coalition presented a blueprint for Ecuador to enforce the Rights of Nature in a strong and practical manner.”

“The Constitutional Court has a responsibility to represent the voice of Nature in the Los Cedros case,” said Natalia Green, co-founder and Executive Committee member of the Global Alliance for the Rights of Nature. “As it has been scientifically described by the various amici curiae during the hearing, permitting mining in this Protected Forest constitutes ecocide and a direct violation of the Rights of Nature within Ecuador’s Constitution.”

Today’s hearing builds from an amicus brief submitted to Ecuador’s Constitutional Court last month by Earth Law Center, the Global Alliance for the Rights of Nature, the Center for Biological Diversity, International Rivers, and the Great Lakes Environmental Law Center. A network of law school professors sign the amicus brief in support, as well.

The amicus makes several requests. First, it calls for fully upholding the rights of Los Cedros with an emphasis on its right to restoration to repair the damages already caused by ENAMI. Second, it calls for the application of rights specific to certain ecosystems—e.g., rivers flowing within Los Cedros have river rights, forests have forest rights, and so forth, each with their own standards. Third, it calls for the appointment of independent legal guardians for Nature. Finally, it calls for upholding human environmental rights and rights of future generations.

Globally, the Rights of Nature are now recognized to some extent in over a dozen countries. This includes the United States, where a handful of Native American tribes and many local communities have passed Rights of Nature laws, declarations, and resolutions. The Convention on Biological Diversity’s post-2020 global biodiversity framework also recently promoted the Rights of Nature in its updated zero draft, which is up for adoption in 2021.