Winter Newsletter and Thank You Members

Looking back on 2014, we want to express our deepest gratitude for your partnership, resiliency, creativity, and support.  Starting with the launch of the International Rights of Nature Tribunal and our Summit in January and culminating with the second International Tribunal in Lima this month, 2014 has been a momentous year for the Alliance.Additionally, we have cheered as many of you hosted regional peoples tribunals, launched Rights of Nature initiatives in your communities and for the EU, organized events to advocate Rights of Nature, and reaffirmed recognition of Rights of Nature and Mother Earth through the messaging of your organizations and at events world wide. Some were spawned in conjunction with our Earth Rights Days of Action in October. Others germinated independently.  It is humbling and exhilarating to be a part of this movement with you.  Our aim is to shine a light on you to spur your momentum and success and to move us all toward a world living in harmony with nature and each other.

The Global Alliance convened the second International Rights of Nature Tribunal in Lima, Peru concurrent with the United Nations Framework Convention on Climate Change (UNFCCC COP 20) in December 2014.  The hearings were an intense, deeply moving two days as one by one experts and witnesses came forward to present facts and stories detailing how they individually and collectively are impacted by gross violations to Mother Earth and the Rights of Nature.

Casey Camp-Horinek of Oklahoma, USA told how “fracturing the skeleton of Mother Earth” for oil and gas is killing indigenous communities across the United States. Her own 600 person Ponca Nation is burying one relative a week due to death from cancer and other diseases.  She spoke movingly about feeling frequent earthquakes in an area that was not prone to earthquakes before fracking.  The shaking is all the more riveting to raw emotions dealing with the deep personal loss and the destructive impact of extractive industries.Sônia Guajajara, the national coordinator of Brazil’s Association of Indigenous Peoples (APIB), described the expansive flooding of the Amazon basin in Brazil caused by construction of the massive Belo Monte Dam.  Tens of thousands of indigenous peoples are being dislocated as their traditional homeland becomes buried under water.  Brazil is building a series of hydroelectric power dams throughout the Amazon to fuel the prodigious demands of aluminum smelters and a burgeoning economy. Furthermore seasonal water levels create questions about Belo Monte’s ability to provide proposed uninterrupted power and may require additional dams upstream to insure water supplies. 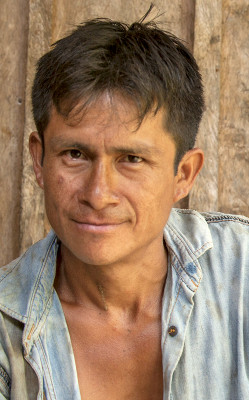 Widows with their children from Ecuador and Peru spoke of the murder and disappearance of their husbands from communities who have been fighting the expansion of mining and oil extraction in South America. The Tribunal was dedicated to the memory of Jose Tendetza, Shuar leader (pictured right) who was found murdered only days before he was to present the Condor Mirador Mine Case.Pablo Solon and witnesses provided clear evidence that false solutions for Climate Change such as geoengineering and carbon market mechanisms employed in REDD projects are systemic violations to Mother Earth and Rights of Nature.Spirits soared as the Yasunidos Collective burst into the room singing and dancing after days of being repeatedly detained by Ecuadorian police who ultimately confiscated their bus. Yasunidos is a group of young activists who are calling for the Ecuadorian government to halt oil development in the fragile Yasuní National Park and to protect one of the most bio-diverse regions on our planet.The Climate Caravan left Mexico several months ago in route to Lima.  The young Yasunidos group joined the caravan as they came through Ecuador to give a global voice to their stand in defense of Yasuní.  In spite of the delays and harassment by Ecuadorian officials, the group hired another bus and arrived to present their case to the Tribunal.

Yasunidos manifests the resiliency of communities and organizations who are saying “Stop this madness!” The International Tribunal, and related locally hosted Tribunals, examine the evidence and give voice to this global call. The time is NOW to transform human consciousness, to redesign failing, consumptive economic and social structures, and to create a framework for living in harmony with nature grounded in the recognition of the Rights of Mother Earth. Learn more:

We are in the process of posting decisions of the Tribunal including videos and details of each of the cases on the Global Alliance website at  http://www.therightsofnature.org/lima-2014-tribunal/.David Hill of the Guardian published a compelling article, Fracking and Lima Climate Talks Slammed at Rights of Nature Tribunal saying “It’s difficult to know what was more moving or arresting” as he went on to describe the intimate testimony of indigenous leaders describing “being fracked to death” and Nnimmo Bassey declaring that “business as usual means cooking Africa”.At the conclusion of the International Tribunal, key members including Osprey Orielle Lake of WECAN, Tom BK Goldtooth presented at a Press Conference inside UNFCCC COP 20 in Lima:

Also in Lima, the Alliance hosted a Rights of Nature Tribunal event at the People’s Summit and marched with partners and some  200,000 participants in the Peoples’ Climate March through the streets of Lima.

A special Thank You!

The Tribunal was truly an international collaboration of our members.  Among the participating leaders were Alberto Acosta – President, Natalia Greene – Secretariat, Ramiro Avila – Prosecutor, WECAN International, Indigenous Environmental Network (IEN), Focus on the Global South, Amazon Watch, Acción Ecológica, Movement Rights, Alianza Arkana, our distinguished judges, and representatives from impacted communities of Peru, Ecuador, Bolivia, and other areas of the Americas, Australia, and Africa.  Thank you to WECAN International and Amazon Watch for arranging the UNFCCC Press Conference.