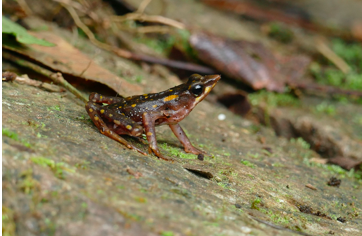 “In a huge win for the environment, on Thursday 24 September a judge at the Cotacachi Court ruled that the Ministry of the Environment failed at its job of protecting species on the Llurimagua mining concession in  northwestern Ecuador’s biodiverse cloud forests. The case has implications for mining companies operating throughout Ecuador,” says Rebekah Hayden, a member of the Rainforest Action Group, an environmental research and advocacy group.

The Constitutional Injunction (Medidas Cautelares) was brought to the Cotacachi court in late August to immediately stop the Llurimagua copper mining project. The case argued that extractive activities in all habitats where endemic species are found should be prohibited.

“Two endemic species of frogs are threatened by the Llurimagua mining project: the Longnose Harlequin Frog and the Confusing Rocket Frog. The case was put forward by environmental and community groups DECOIN, GARN, CEDENMA and the Jambatu Centre.  More than three  dozen other species including , two several bird species, two species of monkeys , and the spectacled bear are also in danger of extinction from the mining project,” says Carlos Zorrilla, a founder of DECOIN.

If you wish to read the judges decision on the case, please click here to download the decision: