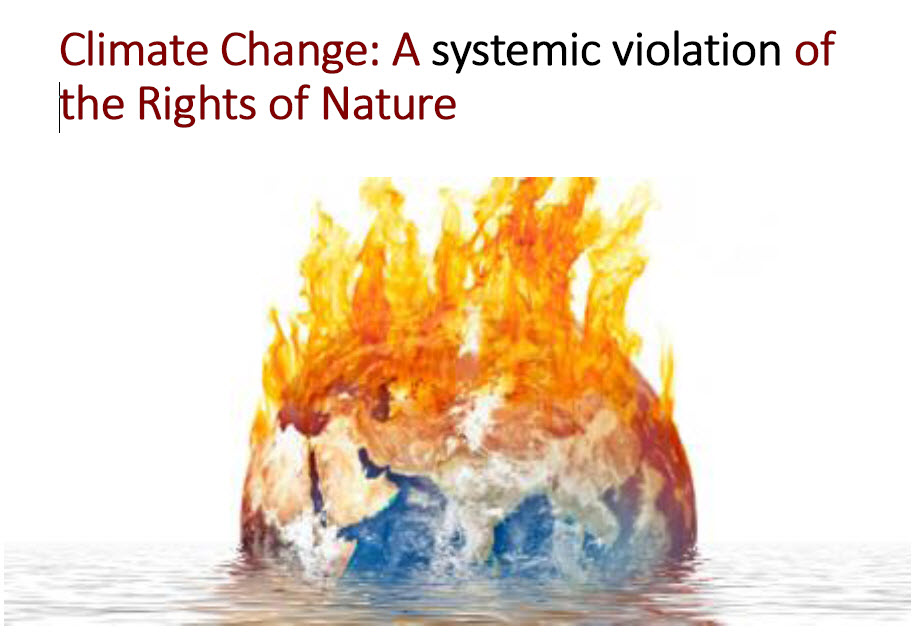 by Osprey Orielle Lake, Serving as a Judge, December 6, 2014

Honorable President of the Tribunal and Ladies and Gentleman:

I want to express my deepest appreciation for all the witnesses for Mother Earth who have spoken so powerfully in the defense of Pachamama and their communities these past days. Particularly, I want to honor the voices of the Indigenous women who have spoken here.

Thank you to the presenters of the climate change case for such a compelling and critical testimony about global warming and false solutions.

The presentation reminded me of a forum I participated in during the Peoples climate march in New York City this past September. Scientists were reporting about their research concerning the harmful effects of increasing CO2 emissions in the atmosphere on pregnant women and their growing babies. What was almost too difficult to grasp at this forum was that we, as a species, we are literally weighing the very health of our babies against a destructive system that has gone completely mad.

Today the climate change presenters have made well-founded arguments illustrating the ways in which the rights set forth in the Universal Declaration of the Rights of Mother Earth have been fundamentally violated by global temperature rise, and by a myriad of false solutions being proposed for mitigation.

If the global mean temperature warms by more than 2 °Celsius (and likely less than that given the dangerous change we have already witnessed), risks to ecosystems and livelihoods will surpass tolerable levels. Humans will likely no longer be able to inhabit many previously hospitable regions, and will suffer from extreme weather conditions, including rising sea levels, loss of arable lands, population displacement by violent storms and floods, droughts, biodiversity loss, mass extinctions, watershed destabilization, and life-threatening food scarcity.

Your arguments have made it clear that the consequences of climate change are leading to irreversible and fatal changes to the very web of life. Because of this and the destructive pressures from capitalism –based on endless material growth, an extractive economy, and a worldview based on domination–we can see there are grave violations of Mother Earth’s rights that are not only destroying animals, plants, rivers , oceans and the atmosphere– but are bringing into question the very existence of the human species.

The fossil fuel industry, our governance structures and corporate institutions must be held accountable for these violations against Nature. While many world leaders hold on to the notion that we can postpone serious reductions in fossil fuels– nature is clearly demonstrating to us that Earth’s natural laws cannot be manipulated, compromised, or ignored.

You have shown us in your presentation that climate destruction is one of many symptoms of the underlying forces of class-based, hierarchical, capital-dominated economics that subordinate and disempower billions of people worldwide.

From the arguments of the presenters, we can see that false solutions, such as geo-engineering, carbon capture and storage, nuclear energy, carbon markets and ‘climate smart’ agriculture are only furthering violations to Mother Earth’s rights. Geo-engineering is a techno fix that interferes with the natural laws of our Mother Earth. And, geo-engineering is doubly dangerous and destructive because it not only interferes with the earth’s natural ability to balance herself, it is also does nothing to address any of the root causes of climate change.

Naomi Klein has said, “The appeal of geo-engineering is that it doesn’t threaten our worldview. It leaves us in a dominant position. It says that there is an escape hatch.” In other words, it allows us to just keep doing what are doing, despite the fact that it is clearly not working.

Likewise, you have shown us that market mechanisms are a violation of Mother Earth’s rights allowing for escalating destruction through the buying and selling of the right to pollute through schemes like carbon trading. It is not a surprise that in these schemes nature is assumed to be a commodity in that the commodification and financialization of nature is inherent in the capitalist system.

When we think about the rights of nature we have to ask: Do we have the right to sell and destroy something that belongs to everyone and should be a shared commons? And, does it make any sense to try to protect nature and heal our damaged ecosystems by further subjecting nature to an economic and legal system that caused the damage in the first place?

Your testimony highlights the urgent need to address immediate actions that are real solutions. Solutions based on climate justice and respect for the natural laws of our Mother Earth.

I have been deeply moved by the tribunal and all the cases we have heard. Our Mother Earth is calling out to us and our hearts are breaking. She is letting us know that we are on a path of great devastation. Today, our hearts also break for our fallen sisters and brothers, Defenders of the Land, whose stories we have heard throughout the Tribunal.

And while it is true the Earth will live on and survive even we do not, it is tragic to think that our mark as species on this beautiful, numinous Planet will be one of destruction and violence, instead of beauty-making, dignity and harmony with Nature.

Your presentation makes it clear that our legal and economic frameworks are at war with the sacred web of life. Clearly we need an entirely different legal configuration that recognizes that Earth’s living systems are not the enslaved property of humans for our exploitation. In order to live in harmony with the earth and safeguard a healthy world for present and future generations, we need to reform the destructive aspects of our modern life.

The testimony of the climate change presenters highlights this urgent need to address climate change with solutions based on climate justice and respect for the natural laws of the planet. I will name here just nine of a myriad of actions we need to take in concert given the scale of this crisis.

In this sense, uplifting the Rights of nature can address our dysfunctional economic system and support the transition we need.

We need to support movements and governance and economic structures that are not based on endless material growth and instead envision a new way of living that is based on care for each other and Pachamama, Mother Earth. A society with a new understanding of ourselves, progress and well-being.

Sumak Kawsay, or ‘living well’, a concept coming from the great wisdom of our Indigenous sisters and brothers, offers us an important direction forward to help us overcome current ideas of ‘development’ and well being. As we think about reparation, mitigation, restoration and prevention of further harm to each other and the Earth, we need to embrace these ideas of Sumak Kawsay.

In closing, what is critical about Rights of Nature is that it can help us reconnect with Mother Earth. This is essential because underlying so many of the root causes of our destructive relationship with nature is a belief by many people that we are separate from nature.

This sense of disconnect from our living earth has proven to not only be spiritually heartbreaking but a disaster in the human experiment. My hope is that in uncovering how our current legal and economic systems violate Natures rights, and in confronting the false climate change solutions being put forward by policymakers, we will have a deeply needed societal transformation. That we will come home, back to Mother Earth with respect and care—and rather quickly given the small window of time we have concerning ecological tipping points.

As Mr. Salon stated: the case of climate change is very complex and far-reaching , consequently, he requested that the Tribunal keep the case open for further evidence to be collected and prepared for a Tribunal that is being organized during the time of the UN climate negotiations in Paris next year. It was also suggest that in Paris, one full day of a Tribunal be dedicated specifically to climate change.

On behalf of the judges to this Tribunal we agree to go ahead with this proposal for Paris next year.